Earlier this month, the airport of Seattle, Washington (Sea-Tac for Seattle-Tacoma) decided to decorate the airport. As a nod to the holidays and

perfectly logically they put up a number of decorated and lit Christmas trees. As I said, this sounds perfectly logical as one can hardly consider an airport to be any kind of competition for Macy’s windows. 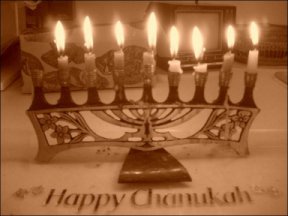 as part of the decorations. All the Rabbi suggested was that one be included . Simple request. The officials of Sea-Tac immediately solved the problem by removing the trees and (how no one knows!) leaking the name of the Rabbi who complained. By now, the “media” had gotten a hold of the story and has begun to push the angle that the Rabbi somehow wanted Christmas trees out of the airport.

This, as might be suspected, did NOT sit well with the Rabbi – who, like so many of us, trying to deal with “important” people apparently kept running into a brick wall. He literally had to threaten Sea-Tac with a lawsuit to get the trees back up.

In the meantime, employees of one of the airlines bought Christmas trees and lights to decorate their counter. There is no word on what Sea-Tac officials had to say about that, but probably not much as airlines rent the counter from the airport and are not thereby controlled by the airport.

Yesterday the airport had the workers re-assemble and re-place the Christmas trees. Sea-Tac now plans to form a committee to look into what decorations should be placed in the airport in the future.

lobby of the airport, or whether or not the canned music should eliminate the 16 different versions of “Grandma Got Run Over by a Reindeer” being played to greet bleary eyed travellers as the deplane.

My concern is two fold. First, the culture of fear this seems to represent. When something like a tree is placed and decorated it can be reasonably assumed that the airport is at least trying to allow some brightness in an otherwise bleak travel experience. When presented with a complaint, the illogical reaction seems to have been one of panic, followed by immediate removal of the trees. I say illogical because it seems to be a reaction based on fear – not thought. Which brings me to the second concern: the lack of communication. Would it have been terribly difficult to sit down and talk to the Rabbi and get his suggestion as to how to change the decorations. The Sea-Tac officials were worried that they would be deluged with complaints about the trees. But they were not. So, to my mind, the reaction looks like a knee-jerk reaction based on fear, which often leads to non-communication. And as long as those two things are operating, the chance to solve any problem goes away.

Of course, this was brought home to me today by a close dear friend. If I can’t say what’s going on, people have no way to help. Sea-Tac didn’t really talk to the Rabbi – so they now have spent a lot of money running trees up and down like a cartoon show. I started not talking about what was going on, so friends couldn’t do what they do best – be friends and acknowledge the situation.

Just as the American Express ads used to say:
Communication, don’t leave home without it!!

by the way, the picture at the top of this post is called The Christmas Tree from one the deep caverns beneath the earth.