Skip to primary content
As I continue these thoughts on truth and making truth work … I want to offer without comment tonight the following fascinating story:

Actually I never thought it did much for Marta,” said Mother from the depths of her closet.

Last year Marta and Vitor returned from one of their trips with a pair of masks. Of a

very fine and transparent material, the masks would adjust to anyone’s face like an extra layer of skin. They did not have openings for the eyes, nostrils or mouth. Some intricate technological device temporarily opened eyes, nostrils, mouth at the touch of a minute remote control. Vitor said they were the height of fashion abroad. We had all heard of them. They protected against pollution in general, covering everything from the neck up to the hairline. So here too they were a hit. Some traveled to buy them, some had them imported. Some brought back stacks of them to sell on the black market. And after a while there were imitations offered even in street markets.

Soon Vitor, Marta and Mother all became addicted to theirs, which they wore 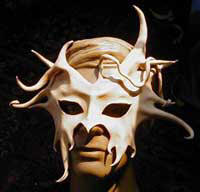 everywhere, inside the house too. Vitor and Mother appeared more self-assured than ever in their insulation. And I suspect Vitor and Marta were not even taking them off when they went to bed. Despite the fact that the masks eventually went out of fashion, the finest being sold for peanuts. To begin with, the climate worked against them. In a tropical country air is what you want most; you want it more than protection from germs, or noise, or smells. Or other people. Only some of the more affluent wear them now as they can afford to constantly live and travel in air-conditioned environments.

Often on my visits to Mother, I find a masked group of half a dozen people or so, usually playing cards, or watching a movie or something. They speak very little and when they do words sound like grunts. They apparently understand one another perfectly though. A couple of times I have tried to participate in whatever they are doing, but had to give it up.

However, Mother has always been very careful to take the mask off inside the house, when she has no visitors, for her skin to breathe. And sometimes I am lucky enough to turn up at such a time when I can exchange words with her while she is having her massage or reorganizing her over-organized closet. Mother’s things in general look like her: very expensive, but in traditional good taste, well behaved. Except for her nightgowns and underwear. These are all silky, lacey and languid, and surprisingly revealing. I must admit I love to look at them, touch them, breathe in their sophisticated scent. Their fluidity seems out of place where they live, right next door on one side to a meticulously tidied drawer where petrified items of clothing lie as if standing at attention, and on the other to a drawer containing a carefully piled up collection of masks.

Lately Vitor started to worry about the dangers to his skin too. He is conscious and proud of his good looks. He could not risk any serious damage to them. So he makes sure he takes his mask off a couple of hours everyday and before going to sleep.

Marta, on the other hand, insecure, plain Marta believes the mask improves her appearance. It is true that it smoothes her skin and gives it a sort of glazed radiance. Also it certainly makes her look more confident, screened from the darts of other people’s often cruel glances. But her eyes. Her eyes look dead under those transparent lids. Nevertheless, everyone realized a while back that Marta would never again take off her mask. And some time after that she informed us that she could no longer take it off even if she wanted to, which was all right with her.

And over the past six months or so, I have been aware of something extraordinary. Something no one else seems to realize. At first, because of the others’ indifference, I thought maybe I was imagining it. But now I am sure. And yet no matter how forcibly I insist, the others will not take my words seriously, will not look. Instead, they respond flippantly seeming unreachable even without their masks. I have tried speaking to Marta herself also, of course. To no avail. I asked her only last week, “Isn’t it becoming a bit uncomfortable?” “No, she answered. “Not at all.” And laughed that muffled, cavernous laugh. Maybe she does not know it is happening. But how could she not? Or maybe she wants it to happen. Who knows.

What is happening is that the mask is eating away the flesh. It is making Marta’s face a little thinner every day. A minute ago, when she stood by the window in the living room, I saw her cheek bones. Not just the impression of the bones under the skin. The bones themselves. Whitish, unmistakable, covered still by a flimsy layer of epidermis which I know will soon be gone. The lips have shrunk so the teeth are never completely hidden. I looked more closely at her face and I could make out the entire skull. It is taking over.

Flavia M. Lobo is a writer and translator from Rio de Janeiro. Her translations for the Brazilian public include Oscar Wilde’s An Ideal Husband and Liam O’Flaherty’s The Informer. She also helped revise the translation of James Joyce’s Ulysses. Her translation of André Sant’Ánna’s story, “Bitches Brew,” appeared in Issue 18 of The Cafe Irreal, and her translation of another Sant’Ánna story, “Love,” appears in the current issue of the online literary magazine OMEGA 6. She currently lives in Tucson, Arizona.