This game based on Boggle is still somewhat in developement, but is quite fun to play.

WordHunter Xtreme was created for the Google Gadget University Awards, and won for Most Addictive. It was made during the numerous Google Gadgets workshops that I held for UPE in the fall. I’m proud to say that USC won for top university submission in the awards, and that another USC student, Ryan Brown, won Most Useful gadget with his WebClip gadget that lets you turn any webpage into a gadget.

When you start the game – there are two games one allows you to use the urban dictionary, and the other has a regular dictionary focus … although “urbanisims” are still allowed. 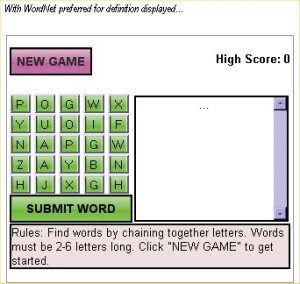