After all that had gone on with and around me in the last few days, I felt that a good laugh/chuckle was in order for a Monday morning – especially if you are one of the ones that does not have today off … 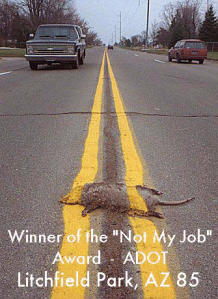 As I mentioned previously there are several lists that I enjoy each year. The Darwin Awards is one of my favorites. I’m continually amazed at what people continually do to themselves and others. Here are some of this years nominees. Here are a couple of entries for the 2007 awards. Some have been reprinted exactly as they were sent to the committee.

A demise by train is almost too common for Darwin Award merit. Yet, some people still forget the three most important rules about trains:

Forgetting these rules, an unnamed 20-year old man was walking down the railroad tracks in Comstock Township (near Kalamazoo) Michigan. 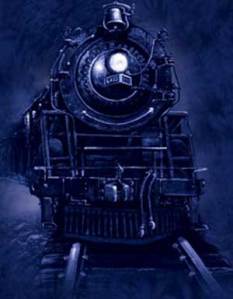 This in of itself in not even close to Darwin stupidity. Trains are loud and noisy and usually announce their approach from quite a distance, allowing anyone in their path ample time to clear out of the way. However, our Darwin contender decided to up the odds in the trains favor by wearing a pair of headphones with the music turned up quite loud (louder than the train horn apparently). It wasn’t mentioned what song he was listening to, but I’m guessing it was “Don’t Look Back” by Boston. Not looking back sealed his fate. Despite three or four loud blasts of the horn by the train engineer, our unnamed Darwin contender kept strolling along between the rails in musical bliss until being removed from the gene pool courtesy of Amtrak.

Here’s another attempts at removing genes from the pool:

I used to ride a scrambler motorcycle in my younger days. 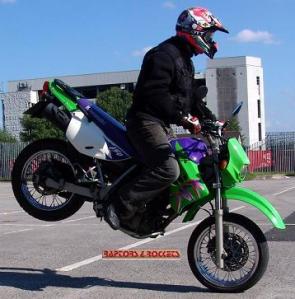 Mine was a 250-c.c. Kawasaki KL ‘Off-Road’ bike. These machines have very small gas tanks, probably no more than about 3 gallons. As South Africa uses ‘Self-Service’ gas stations, we fill our own gas tanks. It is common practice with bikers to simply straddle a scrambler whilst refueling, place the nozzle in the tank and watch to see when the tank is nearly full as these machines lack a fuel gauge.

Now, when standing up and straddling said scrambler, the tank nestles nicely in the groin area. This day, I was not paying attention while refueling and the tank overflowed. “Oops!” I said as I quickly released the handle of the pump. Too late.

Quite a bit of gas had spilled down the side of the tank onto the forecourt and quite a lot had also run down the front of the tank and soaked my groin area. This was no big deal as I was wearing jeans. I duly replaced the fuel nozzle in the holder and THEN it hit me.

Gasoline on your hands is almost imperceptible other than a cold feeling. 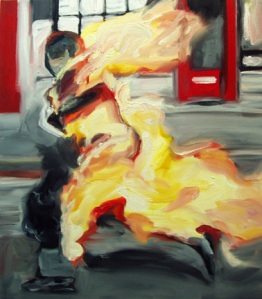 In the groin area, it is like rubbing “Deep Heat” on yourself. Fortunately, I had managed to replace the motorcycle’s gas tank cap BEFORE I dropped the bike, did a sideways leap off the saddle and proceeded to rip off my jeans in full view of quite a few bemused onlookers. Once the jeans were around my ankles, I discovered I couldn’t move very well and fell over as I struggled with my gas-soaked underwear, trying to get them away from my very tender skin.

By now, the forecourt was thronged with very interested onlookers. The interesting thing is; no-one came to my aid! In true ‘biker’ style, I nonchalantly walked back to my motorcycle, kicked it into action and then VERY slowly so as not to lose any ‘cool’, I drove off, gritting my teeth against the searing pain.

Future fueling sessions were performed with a large towel between my anatomy and the motorcycle’s tank. For those who are interested, the gas station in question was the last one at the top of the hill in Hillbrow, Johannesburg, just before the road winds down the hill towards the Ponte apartment complex. I suffered no lasting effects and the redness vanished in a few days.

GRAND RAPIDS, MI — Power was restored to 6,500 people on the southeast side of Grand Rapids after a man nailed a sign on a utility pole and pierced the casing that holds a cable for overhead distribution lines.

The pole, located on the northeast corner of Breton and 28th Street SE, affected the entire Breton substation.

There is a protective case around the cable, but the nail pierced it, making contact with 7,200 volts.

The impact started some of the pole on fire, knocked out power to 6,500 customers, and sent a current through the man trying to hang the sign. Witnesses stated that there was smoke coming from his head.

A cashier at the Shell gas station at that corner called 911. The manager ran out and used a fire extinguisher to cool the man down. The victim was taken to a hospital, and it appears he will be fine. The power company was able to restore power to everyone affected around 9:20 a.m..

The company that owns the utility pole, one of 1.5 million it owns across the state, recommend you not post signs on their poles.

My husband worked in 1995 for a farmer from Germany. Franz on Gilkey road in Crabtree OR.

Franz believed that electricity is like a cow. The raw material goes in the mouth and good electricity exited out the tail and left over energy was waste the cow pooped out, i.e. the 3 wires you see in your house black (hot),white (Hot) and green (cold for waste energy).

Deryl worked for Franz from August 1995 until this event in around the end of November 1995. A windstorm blew through and took out the electricity for the area. Franz had Deryl hook up a generator. When the electricity came back on the Generator had to be taken off line. Remember, this is a full size dairy, with large leads into the circuit box.

Franz was a cheap man, and had the circuit box 2 times smaller than required. He never kept master plans for the property, so no one really knew where the wiring or the plumbing went, everything had been committed to his memory…

Franz convinced my husband to reconnect the dairy, he would not spend $60.00 to have the main breaker pulled at the pole, so everything in the small box was hot. Deryl put on long rubber gloves, and taped up his wrench. Franz never wore socks so his leather slip on shoes were wet with cow urine and feces, Humidity in Oregon was high (87% or greater), so there was a lot of moisture and cow urine,feces everywhere at the dairy.

Franz stood 10 feet back in a shirt and rolled up pants, while my husband wore long sleeves and welding clothes. Deryl got half way through pulling the leads off of there protective poles, 2 off and 2 on.

Suddenly, the poles arced and the lid to the box instantly vaporized. Both men flew backwards, and fortunately, for once, Franz learned that the cow can butt. I met my husband at the door that night to see a man with no face hair, smoking, and a good portion or his chest hair gone. I never saw Franz after this event, but I can imagine. He had less protection. The power company was called the next day and they put things right. Franz never had children, nor should he, thank goodness.

An unidentified man in Xuzhou, China, 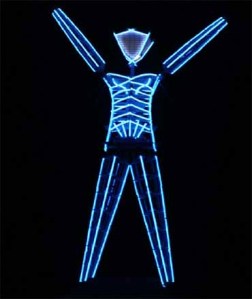 learned the hard way that it pays to use a bathroom when you have to go. Our hero broke into a power supply office with the help of a partner to relieve it of some spare electrical equipment. However before leaving the premises Mother Nature called, and our hero obediently responded. Without a commode handy, and being in an office that he had just robbed, he decided to simply relieve himself where he stood. Unfortunately he ended up urinating on a fully functional electrical supply switch, resulting in an electric shock and a hasty trip to the hospital.

During a party in Budapest, Hungary, on the 26th, November, 2006, a 26 years old man put the hose of a fire extinguisher into his mouth, and fired the device. While he did this presumably for fun, the outcome proved to be fatal, as he was instantly killed from injuries caused by the pressure, which is up to 14 times of the normal atmospheric pressure.

A 63 year old man in East Germany (Zingst)electrocuted himself

when running high-voltage lines (380V) through his yard in an effort to get rid of a mole on his vacation property. Apparently he put several metal rods into the ground and connected these to high-voltage lines. The police had to remove all circuit breakers before they could get on his property. They do not know yet how long he had been lying there before they found him on Wednesday. No word about what happened to the mole.