Earlier this week, and again today – I was asked about various happenings to me during my time in India. I was there from 1971 until 1978, teaching at Woodstock School, an international school.

At the time I arrived, the school was over 100 years old, and when I left I’m sure the school felt it was over 300!! The school is located in Mussoorie , U.P. high in the Himalayan mountains. The school was a boarding school/day school for grades 1-12…with about 450 students in any given year. The school had expanded it’s “junior or senior year abroad, ” and dual diploma program, so as a perk, the school decided (well, leadership actually decided) in 1974 that taking those students on a circle tour of India for about 6-8 weeks would be a very educational and interesting way to fill the time between semesters and keep those students out of everyone’s hair.

The trip was carefully planned, budgets calculated and everything was going according to plan. The trip was going to consist of 28 students (all high-school) and 5 staff. There were a couple of school families added to the mix, so we made a rather large contingent. By now, reservations at the hotels were made, train tickets were purchased and the reservations reasonably assured to be reserved.

During the 70’s and I’m sure today as well, India was highly dependent on trains. It was said during that year at least 10% of the population traveled on trains every day.

Also, without the network of trains manufacturing, transportation of food and such, would be completely impossible. Three weeks before the Cirque de Woodystock was set to leave, the entire train operation came to a complete halt, due to one of the largest strikes in India’s history. As in – nothing going anywhere. A few commuter trains within certain areas supposedly were still running, but nothing else.

And now everything seemed to be unraveling. However, there were assurances from all over that the strike would be settled very quickly, so we went on as if nothing had changed. I’m not going into the historical or political ramifications of all that occurred – that’s not the story I’ve been asked about. Finally, five days before we were to leave, the strike was settled and we were going on a wonderful tour. We packed, laughed – checked tickets and headed out – yes, it felt like a cattle drive at times.

There were many adventures along the way, but one of several highlights has to be leaving Calcutta (now known as Kolkata). The trip into the train station was a small tip of the iceberg as to how this trip was going to go. We arrived in Calcutta to make the connection onward.

With the tie-up of trains due to the strike, literally thousands of people were trapped within train stations. Now, add those people to the people who actually lived in the train stations (no different then people who occupy spaces here in the states or Europe)…and it made for every crowded conditions.

There we stood, like a crowd scene from some Broadway show. After a rather tense 6 hours – part of the sporting events we watched from a distance included an attempt to burn the station down – we were lead to a portion of the platform to await the arrival of the train from the round-house. Which arrived from the round-house completely full. As in packed. 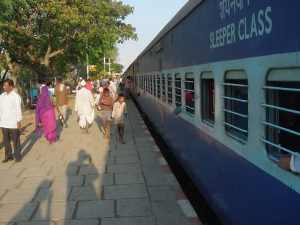 More adventures (for another time) and all of us were on the train. Perhaps saying we were in the car would be a better description. The conditions of that train car made Dr. Zhivago’s train trip seem like traveling on the Orient Express. The car we were traveling on had open compartments on one side, with facing single seat benches on the other – and an aisle dividing the two. There was a bathroom on the end of the car where we were located. The car was designed for a maximum of 72 people. I counted over 150 when I decided that I wouldn’t count any more, and I couldn’t see beyond about 1/3 into the car. Normally, this would be a fairly comfortable way to travel –

but given the fact that as many people as possible were in that car – comfort was not going to be an option. The students and staff were in the three compartments designed to hold four to six plus luggage – now were wall to wall people and luggage. An entire fishing village were camped in front of and around the bathroom. I and three staff were occupying the benches (along with the overflow of the fishing village). Oh yes, important to a later part of the story, there were no closable windows – and this car was one of the first behind the coal fired engine.

“Squeeze a lemon and you don’t get apple juice” was a popular saying a few years ago. The meaning was quite simple – whatever I am inside, is going to come out during stress and strain. Whatever masks or identities I wear — when the going gets personally tough, whatever is within – whatever I hold as “me” is probably going to “shine” when the push becomes the shove. Miss Marley (an elderly lady who lived at the school – and was the oldest resident of the school) always told me – “When you squeeze a grape, you don’t get wine. It’s got to be mashed around a bit first.”