I do love interesting awards – and this annual event will become one I follow – imagine a book contest where the content doesn’t matter – only the title. Some of

the titles make me want to go explore the non-fiction section of Half-Price Books!!

LONDON (AFP) – Industry magazine The Bookseller has opened voting for the oddest book title of the year, some of which suggest that nothing is stranger than non-fiction.

Readers of the magazine’s website www.thebookseller.com are being invited to vote on a shortlist of six non-fiction books in its annual Diagram Prize for the Oddest Title of the Year.

The nominations are made by publishers, booksellers and librarians from around the world. 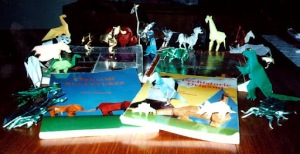 — “The Stray Shopping Carts of Eastern North America: A Guide to Field Identification“

— “Better Never To Have Been: The Harm of Coming Into Existence”

Joel Rickert, deputy editor of The Bookseller, told BBC radio Friday: “It’s the only literary prize where the content of the book doesn’t matter a jot.

“So, there’s still hope for Salman Rushdie or Martin Amis if they’re worried about the Booker (prize). All they’ve got to do is give their books an odd title and they’re in with a shot.”

Last year’s winner was “People Who Don’t Know They’re Dead: How They Attach Themselves To Unsuspecting Bystanders and What to Do About it” by Gary Leon Hill.

The competition has been running since 1978, when the winner was “Proceedings of the Second International Workshop on Nude Mice“