We’ve all heard or gotten an email about the guy who injured himself while using his lawn mower as a hedge clipper, and then won $500,000 in a lawsuit against the lawn mower company?

Or, how about the woman who threw a soft drink at her boyfriend, slipped on the wet floor, and then won $100,000 in a lawsuit against the restaurant?

These are only two of the common examples of lawsuit abuses that are fueling the call for “litigation reform.” They are also completely untrue — part of a growing collection of legal mythologies that are appearing widely in the national media. I’m not sure why people would make-up stories when the real ones are much better.

You know my fondness for awards – and the Stella Awards is among my favorites. (The Stella Awards were inspired by Stella Liebeck. In 1992, Stella, then 79, spilled a cup of McDonald’s coffee onto her lap, burning herself — the “rest of her story” here…with a LOT of information I didn’t know – for instance she wasn’t driving!!)

While shopping at a mall, Meckler stepped outside and was “attacked” by a squirrel that lived among the trees and bushes. And “while frantically attempting to escape from the squirrel and detach it from her leg, [Meckler] fell and suffered severe injuries,” her resulting lawsuit says. That’s the mall’s fault, the lawsuit claims, demanding in excess of $50,000, based on the mall’s “failure to warn” her that squirrels live outside.

#4: Ron and Kristie Simmons. The couple’s 4-year-old son, Justin, was killed in a tragic lawnmower accident in a licensed daycare facility, and the death was clearly the result of negligence by the daycare providers. The providers were clearly deserving of being sued, yet when the Simmons’s discovered the daycare only had $100,000 in insurance, they dropped the case against them and instead sued the manufacturer of the 16-year-old lawn mower because the mower didn’t have a safety device that 1) had not been invented at the time of the mower’s manufacture, and 2) no safety agency had even suggested needed to be invented. A sympathetic jury still awarded the family $2 million.

An FBI agent working a high-profile case in Las Vegas, Clymer allegedly created a disturbance, lost the magazine from his pistol, then crashed his pickup truck in a drunken stupor — his blood-alcohol level was 0.306 percent, more than three times the legal limit for driving in Nevada. He pled guilty to drunk driving because, his lawyer explained, “With public officials, we expect them to own up to their mistakes and correct them.” Yet Clymer had the gall to sue the manufacturer of his pickup truck, and the dealer he bought it from, because he “somehow lost consciousness” and the truck “somehow produced a heavy smoke that filled the passenger cab.” Yep: the drunk-driving accident wasn’t his fault, but the truck’s fault. Just the kind of guy you want carrying a gun in the name of the law.

#2: KinderStart.com. The specialty search engine says Google should be forced to include the KinderStart site in its listings, reveal how its “Page Rank” system works, and pay them lots of money because they’re a competitor. They claim by not being ranked higher in Google, Google is somehow infringing KinderStart’s Constitutional right to free speech. Even if by some stretch they were a competitor of Google, why in the world would they think it’s Google’s responsibility to help them succeed? And if
Google’s “review” of their site is negative, wouldn’t a government court order forcing them to change it infringe on Google’s Constitutional right to free speech?

And the winner of the 2006 True Stella Award: 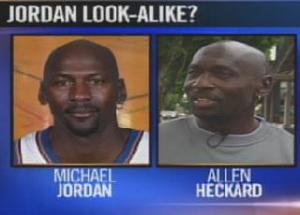 Even though Heckard is 3 inches shorter, 25 pounds lighter, and 8 years older than former basketball star Michael Jordan, the Portland, Oregon, man says he looks a lot like Jordan, and is often confused for him — and thus he deserves $52 million “for defamation and permanent injury” — plus $364 million in “punitive damage for emotional pain and suffering”, plus the SAME amount from Nike co-founder Phil Knight, for a grand total of $832 million. He dropped the suit after Nike’s lawyers chatted with him, where they presumably explained how they’d counter-sue if he pressed on.

As An Added Bonus:
other urban legal myths:

• Kathleen Robertson of Austin received $780,000 from a jury after she tripped over her own son in a furniture store.

• Carl Truman, a 19-year-old in Los Angeles, was awarded more than $74,000 when his hand was run over by a neighbor. The neighbor did not see Truman, who was in the process of stealing his hubcaps.

• Terrence Dickson of Bristol, Pa., was given a $500,000 award after he was inadvertently trapped in the garage of a house that he was burglarizing.

• A Mr. Grazinski won more than $1,750,000 and a new Winnebago after he put his new motor home on cruise control at 70 mph and then went into the back to fix himself some coffee — only to crash on the highway.

1 thought on “The Stella Awards (And Some Are Stellar!)~”