To say that last week was interesting would be an understatement. It was a wild, intense and one where a lot was accomplished. Not easily ~ not always with charm ~ not always without some stress. But then the weekend had arrived and I was “good to go.” Little did I know it should have gotten up and gone!

I was especially looking forward to Sunday when someone that I have gotten to know quite well and I were going to have a quick sandwich and coffee at a small streetside cafe and then spend the afternoon exploring Half Price Books. We had arranged to meet at the cafe around 1:30 in the afternoon. This would still give plenty of time for enjoying the book store. Around 10:00 in the morning I began to get text messages and then phone calls changing the time and location of where we were to meet. Finally I told that the place we would meet would be La Strada. (cue mournful music here.) This establishment was an attempt at an upscale Italian restaurant. Fortunately, they managed the upscale and the upscale price part. Unfortunately, (as far as I was concerned) they didn’t manage the food part.

I decided that I would have some dessert and let that be that.
I headed out on the adventure of the day. (cue Psycho violins here.)

When I arrived at the place, I realized even before I got to the door, there had been a change. The place was very noisy…very noisy. I though maybe it was because the windows on the street were open but then as I approached the door I had the reality hit me ~ this was not the case at all.

The upscale restaurant had become (on Sundays) a 21 (barely) and up (barely) party central location. It’s a little hard to remain upscale when all the drinks are being served in plastic glasses – coffee in foam cups!! And the place was packed. I realized that probably 80% of the boys “guy’s” voices hadn’t changed (21??) and NONE of the women’s voiced had progressed beyond grade school. 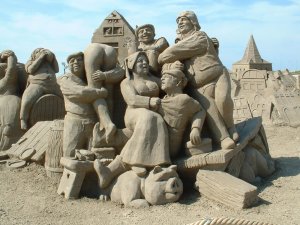 It was as if I were at a Hanna Montana concert that was never going to start.

My friend? He was at the bar trying very hard to get under it – I think. To say that he had been drinking his lunch would have been been an understatement. He had used all the breakfast, dinners AND lunches for three weeks or more. I am now surrounded by people in high-pitched shriek(s) and a very intoxicated friend who is pawing me and giving me bone crushing bear hugs inbetween telling me what I was going to do and asking me for money. Great conversation points there!!

And, of course, Monday was St. Patrick’s Day . . . I found something very interesting and decided to end tonight’s post with these VERY clever cell phone charms from Japan. They are called the 6 stages of drunkenness ~

The rest and the conclusion tomorrow …