With tropical storm Eduard bearing down, people are beginning preparations for what may/might happen … where I live in Houston, we will probably have plenty of rain and some wind. As with tropical storms/hurricanes they have a tendency to keep their intentions fairly close to the chest and don’t play their cards until the last possible moment.

Lat week I finally got a copy of a book that has been available for a number of years. I have e-mailed the author for permission to do some quotes from the book, but tonight I wanted to start with a story the author tells. It was a story I’d heard a number (?!) of times before – but where I am on this journey now – this time it really spoke to me on a number of different levels. (with apologies to Aesop and others)

There once was a man who by being blessed with good fortune was given a goose in exchange for some work that he did. While he was not happy with only getting a goose, he thought it would at least make a good dinner as it seemed very fat and actually quite content.

He took it home and placed the goose in a box by the fireplace so that it could stay warm and stay within sight.

In the morning when he looked in the box the goose had been in – he was astonished to see a golden egg. One golden egg. Knowing this was quite valuable, he took it into market and sold it for quite a good sum of money. He was pleased.

Each morning he checked the goose’s box and each morning there was yet another golden egg – each as valuable as the first one.

This went on for sometime and eventually the man became somewhat impatient.

Rather than having just one egg a day, he began to wonder why they goose didn’t lay two or three. . . or even more.

He began to realize that the goose must have either gold inside or a lot of golden eggs. So, early one morning – right after the goose had laid yet another golden treasure, the man killed it.

He quickly cut it open expecting to find a treasure that would make him rich and powerful for his entire life. 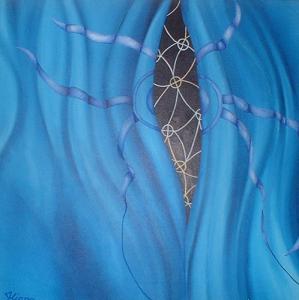 He was to find nothing other than what any goose or living creature would have inside.

And now, he was left with a hacked up goose not fit for cooking and no goose to lay golden eggs.

For years I’ve heard the “moral” of the story as “greed can overreach itself” or “haste makes waste” or “what some people have is never enough.” But there is a very different approach to the story that really had me evaluating my life and somethings that I’ve done. Not that they were “bad”, so to speak – but perhaps there might have been a better way…

By the way – I thought you might enjoy the Indian version of the story – this was translated and published in 1895.

The Golden Mallard
from The Jataka

Once upon a time when Brahmadatta was reigning in Benares, the Bodhisatta was born a Brahmin, and growing up was married to a bride of his own rank, who bore him three daughters named Nanda, Nanda-vati, and Sundari-nanda. The Bodhisatta dying, they were taken in by neighbors and friends, whilst he was born again into the world as a golden mallard endowed with consciousness of its former existences.

Growing up, the bird viewed its own magnificent size and golden plumage, and remembered that previously it had been a human being. Discovering that his wife and daughters were living on the charity of others, the mallard bethought him of his plumage like hammered and beaten gold and how by giving them a golden feather at a time he could enable his wife and daughters to live in comfort. So away he flew to where they dwelt and alighted on the top of the central beam of the roof. Seeing the Bodhisatta, the wife and girls asked where he had come from; and he told them that he was their father who had died and been born a golden mallard, and that he had come to visit them and put an end to their miserable necessity of working for hire.

“You shall have my feathers,” said he, “one by one, and they will sell for enough to keep you all in ease and comfort.”

So saying, he gave them one of his feathers and departed. And from time to time he returned to give them another feather, and with the proceeds of their sale these Brahmin women grew prosperous and quite well to do.

But one day the mother said to her daughters, “There’s no trusting animals, my children. Who’s to say your father might not go away one of these days and never come back again? Let us use our time and pluck him clean next time he comes, so as to make sure of all his feathers.”

Thinking this would pain him, the daughters refused.

The mother in her greed called the golden mallard to her one day when he came, and then took him with both hands and plucked him.

Now the Bodhisatta’s feathers had this property that if they were plucked out against his wish, they ceased to be golden and became like a crane’s feathers. And now the poor bird, though he stretched his wings, could not fly, and the woman flung him into a barrel and gave him food there. As time went on his feathers grew again (though they were plain white ones now), and he flew away to his own abode and never came back again.