Every so often it comes over me. It’s a feeling not of despair or hopelessness ~ but one of deep cynicism. It is not a pleasant feeling or way of thinking. If allowed to run free, it begins to color so many areas of life. . . relationships, friendships and way of life.

As I was trying to track down where this was coming from or being “fed” by, I realized that the political arena was mostly to blame.

I was surprised because usually my reaction politically is a heartfelt “Meh” (a new word in the dictionary) or a rather disgusted “Oh well . . . “. It seems that this time the political circus has moved beyond the annoying to emulating the Keystone Kops!

It started with Mr Pay-for-Play Rod Blagojevich, who, until we actually have a chance to hear/read the transcripts of the recorded conversations, seems to be guilty of nothing more than stupidity and babbling bluster. However, that was until the Senate leadership, in its infinite leadership wisdom entered the act. With extreme posturing ~ even by political standards ~ announcing that no one appointed by the governor would be seated in the Senate to replace President-Elect Obama. At first blush it seemed reasonable enough, however with some reflection I remembered there was a court case where the House was told by the Supreme Court no less, That Congress lacked power to fashion its own standards for admittance (back in 1967, involving Adam Clayton Powell ~ race surely coincidental). Of course, the Governor did exactly that . . . he appointed Roland Burris who one article described as someone who: “never lacked in self-esteem or retreated from long-odds challenges.”

This appointment boxed the Senate leadership into a nice corner of their own making.

Then, I read in chigacotribune.com this priceless bit of information ~

“ While the process slogs along, it’s also possible that Burris could take on some limited trappings of office.

Past practice (cue music from Fiddler on the Roof here)

in the Senate has been to grant a senator whose credentials are disputed office space and payroll for a staff, as well as floor privileges—but not a Senate seat—until the situation is resolved. So Burris potentially could be allowed to enter the exclusive club, but not as a full member, without the ability to vote, speak or even literally sit at a senator’s desk.“

At that point, my cynical meter was almost on overload. Everything but the ability to vote or have a seat on the senate floor? Are you kidding me?

It no longer is a surprise to me that Congress is unable to get anything done. They’re too busy living on tradition or trying to outdo or outshout anyone else.

However, all that paled when my cynic (OK, B.S.) meter finally exploded. 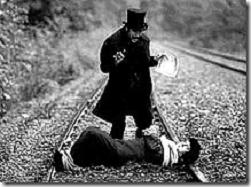 I had heard this before, but it wasn’t until tonight that any of the anchors seemed to make a point of it . . . The Senate Majority Leader Harry Reid had evidently called Mr. Blogojevich to tell him who NOT to appoint (evidently) because they would not be “electable” in the 2010 elections!! No name politicians such as: Jesse Jackson, Jr., Danny Davis or Emil Jones. Now, this has moved from the Keystone Kops to The Perils of Pauline!

While I am using the political situation as a “set-up” this is not basically a political two-part post. Tomorrow I’m going to explore what this cynical attitude can do to me and to those around me … after all:

“The opposite of creativity is cynicism”
—Esa Saarinen