If you are looking for a last minute Father’s Day gift (for me, of course!) ~ look no further … from Bloomberg.com.

A diamond-encrusted platinum skull by Damien Hirst will go on sale for 50 million pounds ($99 million) in London. The price compares with the $8 million hedge-fund manager Steven Cohen paid for the artist’s pickled shark in 2005.

“For the Love of God” is covered entirely by 8,601 stones weighing a total of 1,106.18 carats. It will form part of the exhibition, “Beyond Belief,” at the White Cube, Mason’s Yard gallery next month. Other works will go on show at Hoxton Square.

A sale of the skull for about $100 million would put Hirst, 41, on a price level with Pablo Picasso and Gustav Klimt, dead artists who produced some of the 20th century’s most famous works.

White Cube won’t release an image of the skull (I have an image below) or discuss security, gallery spokeswoman Sara Macdonald said in a telephone interview. She confirmed the 50 million-pound price, reported in the Sunday Times on April 29. There’s a private view on June 2 and the exhibition will open to the public from June 3 through July 7.

The show will include two new series of works. “Fact Paintings” depicts the birth of Hirst’s son Cyrus by cesarean section in August 2005. “Biopsy Paintings” are based on images of 30 different forms of cancer and other terminal illnesses.

“In this exhibition, Hirst continues to explore the fundamental themes of human existence — life, death, truth, love, immorality and art itself,” White Cube said in a press release.

The U.K. artist employs about 80 people in studios and administration, having added 30 staffers to handle coming shows, his spokeswoman Jude Tyrrell told Bloomberg News in March.

Actually – when you scroll down to see the skull … it’s really kind of creepy. Perhaps the pickled fish would be a better idea? Or as my Mother would say: “Just one more thing to dust!” 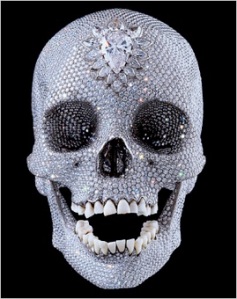