This was posted on one of my absolutely favorite morning blogs –> Daily Kos<- -, which if you have not bookmarked, you should. It is updated during the day, and for American politics, culture with amazing commentary could not be any better (sorry, Huffington Post!)

At first I thought I might make a few “comments” about the mess in Albany, NY ~ but they’re doing just fine holding THAT circus without any further comments from me!!

I had written about RIAA and MPAA –> once before here <– an ezine called Zeropaid. This was the section that was posted at Kos and really caught my attention … These might be the reasons they lost the PR battles and probably the "war" ~ (Republicans, are you listening???)

-destroying Napster and Audio Galaxy and not creating an alternative for the get-go,
raiding people’s homes because they uploaded Star Wars (not necessarily leaking it in the first place),
-hacking the URN hash and polluting FastTrack,
-hacking The Pirate Bay,

-having Viacom serve DMCA notices to people posting video’s of people eating in a restaurant on YouTube,
-suing tens of thousands of average American’s including fining one individual $222,000 for sharing a couple songs,
-saying that files in a shared directory is copyright infringement in court,
-saying that evidence is too hard to get and that the industry shouldn’t be burdened to prove their cases in court,
-suggesting that iPods are little more than little pirate ships,
-saying in court that even making one back-up copy of a DVD is illegal,
-lobbying to put in the DMCA, demanding that laws should be in place to prevent any tinkering with DRM including for research purposes,
-installing rootkits on people’s computers,
-installing spyware on people’s computers via the MediaMax technology,
-being outed for being hypocrites for pirating a documentary movie and claiming that it’ll only be in a safe place,
-tried to bring people a broadcast flag and telling people you can’t record TV shows if the broadcaster doesn’t like it,
-trying to bi-pass the backfiring of WIPO and the FCC to bring in the broadcast flag anyway, -tried to get ISPs to do all the copyright industry’s dirty work,
-pressured and bullied other countries to implement laws the industry saw fit and using shady lobbying tactics to accomplish this,
-tried to sell us music that cannot be copied through the internet and on discs,
-tried to bi-pass the will of the European Union and get countries to pass “three strikes” laws even if artists disagree with it,
-attempted to price fix music albums,
-secretly hold negotiations to pass draconian copyright laws that would see people’s physical property effectively stolen on the mere suspicion of copyright infringement through ACTA, -demanding that laws be passed that mandates the promotion of legal alternatives,
then not providing the kind of deals that would allow legitimate services to flourish with internet groups and businesses like ISPs,
-alienate an entire generation by labeling their own customers as pirates,
-likened downloading music on the internet to terrorism,
-likened internet users who download music online to “biker gangs”,
-spread blatantly false information about file-sharing,

-forcing people to watch anti-piracy ads on movies,
-suing people who had a recently deceased family member,
-argue that the industry is for artists, then going to court and demanding that royalty rates should be lower for artists – thus having to pay them less and keeping more money from album revenues,
-forcing radio broadcasters to pay royalties even if they don’t play music from the copyright industry,
-suing a lawyer for blogging about court cases related to copyright,
-and possibly the whole issue of listing countries that hold 70% of the world’s population and labeling some as rogue nations that need to update their copyright laws via the USTR Special 301 report – thus alienating many countries in the first place.

Again, a short list of probably simple misunderstandings in the world of PR that have been taken out of context by the “enemies of copyright”.“

Just so it’s clear, the copy is from the articles, the pictures I added …

An article in the news today allowed me to look back at an earlier article about the same subject. The article today was about Internet censorship ~ it involved several major players: AT & “We’re not the old/new ma bell” T, NB “how dare you post a show we’ve posted on YouTube” C, and Micro “we own the internet” soft.

At first I thought it was something that wasn’t going to go very far, very soon ~ then I read this paragraph:

“. . . AT&T has been talking to technology companies, and members of the MPAA and RIAA, for the last six months about implementing digital fingerprinting techniques on the network level.”

It was those lovely MPAA and RIAA letters that gave me pause. I have thought for sometime that when a major entertainment group is threatened by new technology and/or advances they react as a lumbering dinosaur. There is a lot of noise, fury and damage while desperately clinging to the old vines of doing business as the vines appear to be rotting out from under them.

While lamenting the decline of CD sales (and the profit they bring to the RIAA) the blame is being placed on the evil people who download. This has resulted

in court cases involving elderly grandmothers and very young children … obviously the ring leaders determined to bring down the entertainment industry as they know it. The fact that artists have succeeded by using the Internet to showcase AND release their material seems incidental as they cling to an aged business model.

And recently the RIAA decided that uploading a song you purchased from YOUR music player to YOUR computer is a mortal sin worthy of death by flogging or another lawsuit. Heaven forbid that you would even THINK of burning onto a CD!

For the past fifteen years, Internet service providers have acted – to use an old cliche – as wide-open information super-highways, letting data flow uninterrupted and unimpeded between users and the Internet.

But ISPs may be about to embrace a new metaphor: traffic cop.

At a small panel discussion about digital piracy here at NBC’s booth on the Consumer Electronics Show floor, representatives from NBC, Microsoft, several digital filtering companies and telecom giant AT&T said the time was right to start filtering for copyrighted content at the network level.

Such filtering for pirated material already occurs on sites like YouTube and Microsoft’s Soapbox, and on some university networks.

Network-level filtering means your Internet service provider – Comcast, AT&T, EarthLink, or whoever you send that monthly check to – could soon start sniffing your digital packets, looking for material that infringes on someone’s copyright.

“What we are already doing to address piracy hasn’t been working. There’s no secret there,” said James Cicconi, senior vice president, external & legal affairs for AT&T.

Mr. Cicconi said that AT&T has been talking to technology companies, and members of the MPAA and RIAA, for the last six months about implementing digital fingerprinting techniques on the network level.

“We are very interested in a technology based solution and we think a network-based solution is the optimal way to approach this,” he said. “We recognize we are not there yet but there are a lot of promising technologies. But we are having an open discussion with a number of content companies, including NBC Universal, to try to explore various technologies that are out there.”

Internet civil rights organizations oppose network-level filtering, arguing that it amounts to Big Brother monitoring of free speech, and that such filtering could block the use of material that may fall under fair-use legal provisions — uses like parody, which enrich our culture.

Rick Cotton, the general counsel of NBC Universal, who has led the company’s fights against companies like YouTube for the last three years, clearly doesn’t have much tolerance for that line of thinking.

“The volume of peer-to-peer traffic online, dominated by copyrighted materials, is overwhelming. That clearly should not be an acceptable, continuing status,” he said. “The question is how we collectively collaborate to address this.”

I asked the panelists how they would respond to objections from their customers over network level filtering – for example, the kind of angry outcry Comcast saw last year, when it was accused of clamping down on BitTorrent traffic on its network. Read the article about THIS lovely issue HERE )

It was this from the article that gave me the title of tonight’s post: 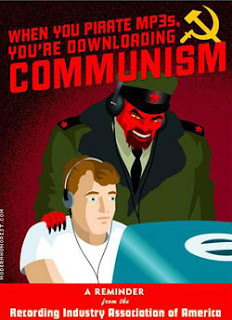 Oh yes, a friendly way to do it. Maybe they could hire consultants from MPAA and RIAA since they are having such success with what they are doing.